Milawa is a great example of a long standing, incredible Australian cheesemaker. Family run since 1988, Milawa hold a huge legacy in the world of cheese throughout Australia. We need to keep supporting these legends, so the legacy can continue now and well into the future.

Who is Milawa Cheese?

Just imagine, you’re a teacher and your husband is in applied science. A school friend consoles you every time over copious amounts of wine to create the best Cheese Factory in Victoria, Australia, The World! Yet what do you know about cheese making? After another stop at Brown Brothers, you sight the old butter factory in Milawa. Could this be it? You resign from your jobs, up digs in your cappuccino sipping inner Melbourne location and drag the kids to this “slower life”. Enter the dream of David & Anne Brown. Their very first cheese was crafted back in 1988 and to this day they’ve kept making the favourites and expanding on them to bring even more cheeses to life that are spot on the money.

We've put four cheeses in this pack to showcase our absolute favourites from Milawa Cheese.

Milawa’s David Brown has a particular love for aged cheddars and personally selects cheddar to mature in his cheese rooms. It’s not an easy task to select the best cheddar but David has the know-how and has made this his speciality. With a sharp and fruity taste, this cheddar is well aged and is smooth on the palette. It’s so good, he put his name to it.

The King River Gold is a gentle, subtle style of stinky (washed rind) cheese. The rind is a delicate pink-orange colour and has a slight salty crunch to the bite, giving way to the soft, delicious interior. The flavour is rich yet mild with earthy, smoky notes, and a smooth paste that will start to ooze if you leave it out of the fridge for a few hours.

The fact that they wanted to create European-inspired cheese back in the eighties was smart considering the drought of great produce that was coming into the country. David had fallen in love with the cheeses of Northern Italy, particularly the young and sweet Gorgonzola Dolce. After several years of trying, Milawa Blue was perfected with an Italian flair but Australian-style.

Why Milawa Cheese is for you

This is the second time I have purchased these cheeses, it won’t be the last. We didn’t use all at once as my husband was away, so I have saved the blue, and some of the cheddar to share with him. He really enjoyed the King River Gold at Christmas but I’m sorry (not sorry) that I didn’t save any of that for him . The grazing box is lovely, though I only used one of the pastes this time. 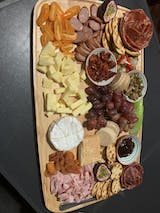 This pack has seriously good cheese! The Camembert is delicious, the blue is amazing, the Cheddar is one of the nicest I've had and the stinky is impressive. Very happy we bought this one.

The 4 Milawa cheeses were distinct and separately exquisite. We’ve entertained friends with them and also kept a serve for ourselves yum