"Aussie cheese with a French heart"

Our Australian cheesemakers truly are outdoing themselves, with the quality of their cheeses competing with age-old traditional cheesemakers in Europe and the rest of the world. L'Artisan is one Australian cheesemaker you can't help but want to hold onto as our own. With a vast French cheesemaking background, we couldn't be prouder to bring you this cheese pack from our friends at L'Artisan.

Who is L'Artisan?
Matthieu Megard has continually proven to be one of the country’s best cheese makers. Hailing from France, this third generation cheesemaker captures the essence of his surrounds of the Great Ocean Road and combines that with his knowledge of French cheese making. It’s no wonder why we have continually featured his produce.

This pack includes four French inspired cheeses from third generation cheese- maker, Matthieu Megar, who has continually proven to be one of the country’s best!

Fried cheese can be compared to that exact moment hot water hits your skin during your morning winter shower. It warms your soul and this Halloumi will absolutely give you the same feeling! Fresh milk taste, moderate salt and surprisingly smooth texture is what you’ll find when you enjoy L’Artisan Halloumi. Grill & add to a salad or devour it on its own with a drop of olive oil!

Fermier translates to “farmhouse” and this cheese certainly does give a feeling of hand made labours of love. But when the wheel is cut open, it reveals something quite special that is rarely seen in the more modern cheese making world - a layer of ash. This process is called Morbier. Over the centuries, any left over curds were put into a mould and a layer of ash sprinkled over the top to preserve it for the next day’s production. This process of layers of curd were continued until the hoop was full and the cheese was formed.

Great cheese starts with great milk. In this case, Matthieu gets his organic milk from cows grazing near Victoria’s Great Ocean Road. Petit Fleuri is a surface ripened white mould cheese developed made from organic milk with added cream, this luscious double brie cheese has a rich yellow coloured interior. Expect nothing less than an indulgently rich, creamy, buttery flavour texture and mild, creamy flavour, with just a hint of garlic chives.

The cheesemaker is the master of the petrie dish of moulds and bacteria as they select which to make with their cheese. A strong Washed Rind, this little number has vigorous pungent flavours, yet is complex with a surprisingly oozy texture when ripe. Using a combination of yeast producing rind washing and bacteria, the Petite Rouge has a signature aroma and flavour.

My order was for my brothers 50th, he’s in Melb I’m in Perth. It was meant to teach him on that day but in fact arrived 2 days later. This was no fault of Cheese Therapy, the order had apparently been placed on the wrong truck by the delivery company. Although I was extremely disappointed he did not receive it on the day, his feedback to me was that it was absolutely delicious, looked amazing when he opened and he was very happy with it. Would I use Cheese Therapy again?, definitely but perhaps check who the delivery people are. Cheese Therapy, who I might add were very helpful in trying to find out what happened, i give top marks.

Very much enjoyed by the family for Christmas

Thank you very much, I had the opportunity to share with my neighbour Christmas eve and my son's family on Christmas day on both occasions everyone raved about the taste and quality of your cheeses, brilliant.

I received this as a gift and I have never been more happy or impressed. The haloumi is the best I've ever had! The scent of the Petit Le Rouge was stunning *chefs kiss*. Fantastic gift, great packaging and awesomeness on the whole. 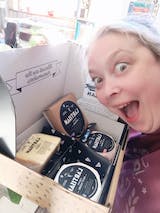